As the house lights turned back on and I exited my local theatre into the bright night sky, my mind kept lingering on one question.

“How in god’s name does this film exist?”

Taken literally, the answer is quite easy to find. Prolific rapper Boots Riley finished the screenplay for this passion project in 2012 and after searching for the means of production, began filming in June 2017. But when I ask this question, I mean it more figuratively. For what we have in Sorry to Bother You is a film that is unabashedly anti-capitalist, anti-racist, and ultimately leftist; something more often seen in the indie scene rather than a mainline Hollywood production with a wide release.

Broadly speaking, the film is a sci-fi satire set in a dystopian Oakland, California which sees a down on his luck Cassius Green, played by Lakeith Stanfield, move up the Regalview company ladder after discovering his elusive ‘white voice’ which makes him the company’s premier telemarketer. Yet his rags-to-riches fantasy is interrupted as he is tasked to sell weaponry and modern day slavery rebranded as ‘uber for labor’ for the company WorryFree, run by the delectably evil Steve Lift, played by Armie Hammer. This puts Cassius at odds with his union organizing friends at Regalview, his artist girlfriend Detroit, played by the wonderful Tessa Thompson, and his own conscience. 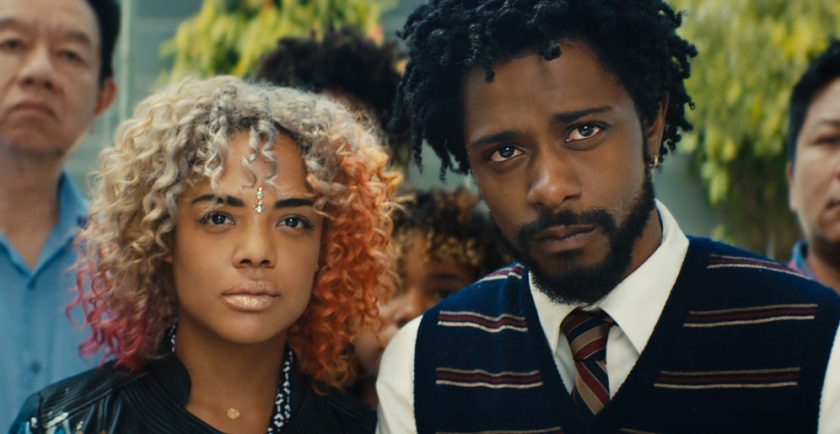 How Boots Riley depicts Cassius Green journey is quite well thought-out in terms of cinematography. The director chooses, wisely, to depict Cassius rugged beginnings, his friends at Regalview, and their interpersonal interactions in the lens of cinematic realism. The camera tends to linger during dialogue, sets lack extravagance, and there are an abundance of wide shots. Yet as Cassius Green ascends up the hierarchy and walks the halls of avarice, the cinematography matches the transition with more formalistic qualities. Sets and costumes become more extravagent, the camera loses the wide shots in favor of close-ups and particular angles, and the more sci-fi dystopian elements of this setting take center stage. As these formalistic elements are injected into the film and encroach on it’s more realistic beginnings, they might appear to some as jarring, perhaps even threatening. But this deliberate, as the engulfing of realism by formalism mirrors how the logic of capitalism threatens to consume Cassius Green and others. 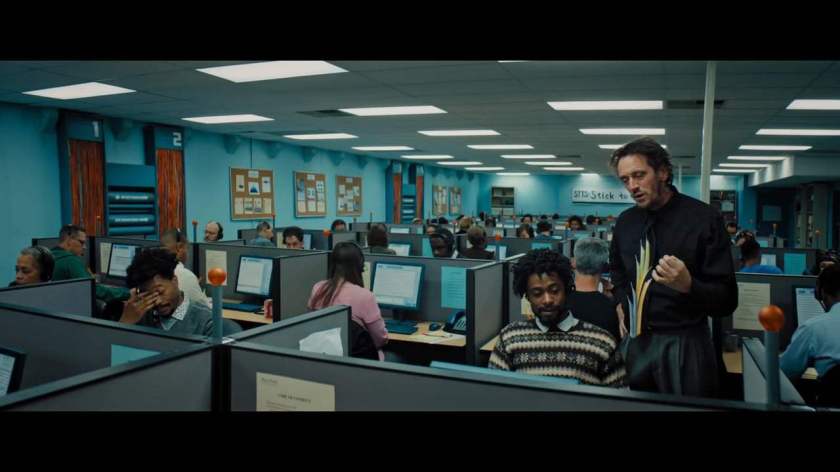 And what a destructive logic it turns out to be. Though the efforts of Steve Lift and others try to mask it under a veil of voluntarism, this is ultimately revealed to be a facade. Cassius uncle, played by Terry Crews, only considers WorryFree’s labor program under the threat of homelessness, while others characters make choices to sell or atomize themselves under similar threats of structural violence. These choices in the film are accompanied by devastating consequences to both the characters and their relationships to their loved ones. This is exemplified best by Cassius’s arc, who by climbing the corporate ladder privatizes himself from others. Yet as Cassius is welcomed into the arms of the rich and powerful, as portrayed by scenes set at Steve Lift’s party, he quickly realizes that all his efforts have meant to his bosses was to communicate that he was a useful tool, or even, in the film’s most race-sensitive moment where Cassius is forced to rap in front of all the party’s attendees, a source of amusement. An entertainment to be enjoyed by the white, capitalist class alongside the pain of those who struggle against them. What this dressing down of capitalism the film performs then is the revelation of the cognitive dissonance required for man to claim to offer a voluntary choice while holding a gun.

Yet because of Sorry to Bother You‘s grand ambitions, the film can at times stumble under the weight of it all. While the dubbed in ‘white voice’ is suppose to be jarring to some degree, it occasionally fails to match the actor’s body language in such a way as to be distracting. In addition, while Detroit is played well by Tessa Thompson and she bounces off of Lakeith Stanfield wonderfully as Cassius’s voice of reason, her side plot is a source of confusion. It seems that Boots Riley is trying to explore with Detroit’s character whether or not art can serve as an critique of capitalism when it is supported by it, with Tessa Thompson imitating a ‘white voice’ via a British accent and offering herself up to public harassment as part of her radical art exhibit casting doubt. However the arc never comes to a resolution in a way that feels satisfying, which makes me suspect that scenes related to Detroit’s side-plot were edited out during post production. As the only significant feminine perspective in the movie, the lack of resolution for her own side-plot is unfortunate.

Yet try as I might, I can’t hold the film’s flaws against it in a significant way; a result of clear passion the cast and crew put into it. It’s like Boots Riley and company snuck into Hollywood to make a film under everyone noses, knowing that they’ll never get to do this again and endeavoring to throw everything into it. While the end product is occasionally messy, it is also incredibly funny and offers a perspective rarely seen in a mainline Hollywood production. Thus I encourage you to go to your closest theatre and let this film bother you like it did me. You won’t regret it!